Every year approximately 59 million people die in the world. Dear reader, can you guess the two main initial reasons that eventually cause death? About 20% of the people that die each year, die because of these two reasons. One of these is better known and lots of attention is paid to it, but the other reason is no less important.

Of course, the first reason is smoking, which kills about 6 million people each year, and about one tenth of them, that is 600,000 die because of second-hand (and tertiary) smoking. But this is not what I wanted to focus on today…

I guess I could say that today I am writing about diabetes, mood, mental and physical abilities, sleep disorders, mammary gland cancer, bone, muscle and joint problems, rectal cancer, heart health, overweight, etc. which are all caused, to a great extent, by not moving enough and which “assist” over 5 million deaths every year.

How much is not enough?
To maintain a general body tone and strength the recommended weekly dose of physical
exercise is 150 minutes of faster walking or something similar, during which the person is still able to talk (that is, breathing does not disturb communication), in 10 minute stages OR 75 minutes of more intense physical exercise (due to heavy breathing normal talking is no longer possible).

To improve muscle tone it is also recommended to do muscle training exercises at least twice a week in addition to the previously stated.
It is discovered, however, that only about 10% of the population follows these recommendations…

“But I don’t have the time, money, necessary equipment…”
It’s understandable that if you are not used to regular exercise then finding the aforementioned time for a 30-minute walk on five days in a week can be complicated. I recommend starting slowly, one step at a time – for instance, when you get home from work or school, then before going inside walk around your house, the next day walk around the house twice. After some time expand the walking circle around the neighbouring house, then start getting off the bus/tram/trolley bus one stop earlier, etc. If there should be a pause in your regimen for some reason then you can pick up at a suitable level and keep going without giving up. After a while you might also go grocery shopping by foot and not by car – in this case you will also be more critical about your purchases because you will have to carry home everything you buy. You can organise meetings with smaller participant numbers by doing some activity and not by sitting around a conference table. Some people are motivated by competition – people compare daily/weekly/monthly steps made with their friends and colleagues. There are different devices, from small to large, from cheap to expensive, for conducting such “competitions”.
And you don’t need to go to the gym to start exercising your muscles. You can start at home by watching relevant YouTube videos, if necessary.
The long-term goal is to improve your mental and physical condition, improve your mood, reduce the health risks described above – but all that with a pace that is suitable for you. If you have an illness, you are recovering from a trauma or you are unsure with which workload to start, consult your doctor to assess the situation and make specific plans.

To sit or not to sit… 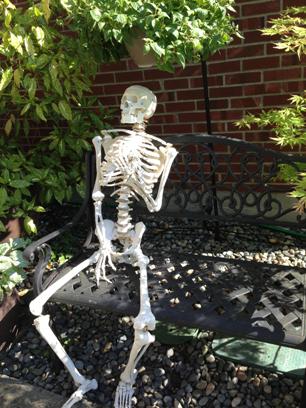 In addition to general low mobility, excess sitting is also dangerous. According to some sources it is especially bad to sit after eating and a very bad exsample is passively sitting in front of the TV for hours.
Ten hours of sitting every day increases risk of dying by 34% – this means that over time, per each death of a person who sits less, 134 people who sit 10 hours (per day) die.
Of course, sitting is a must in some instances but it is recommended to stand up at least once per hour, walk around a little or perhaps even make a few faster moves – just like kids at school who get a break after intensive learning for a certain period.

Lose the weight!
I’ll mention just in case that if your goal is to lose weight then diet plays the main part and simply adding physical exercise might not be enough. There have been findings which suggest that the physical exercise releases a flood of healthy behaviours which makes people pay more attention to other things, but when the aim is to lose weight then you need to look over your menu because diet makes about 70% of the weight loss process. Several studies have shown that health-wise, the people who are slightly overweight but physically active are in somewhat better condition than people who are in normal weight but are physically inactive.
But it is wise to pay attention both to diet and moving, and it is also important to remember that 60–70% of the person’s health is in their own hands and modern medicine’s part is only 10–15%. The rest (25–30%) is up to genes (which, as stated earlier, we can also affect to a certain extent), environment, etc.

So let’s be active and eat healthy. Don’t fear the recommendation to spend at least 30 minutes sweating on five days in a week, but find the one activity, pace and time that is perfect for you and then just keep moving forward!